Interactive whiteboards prove to be successful on campuses 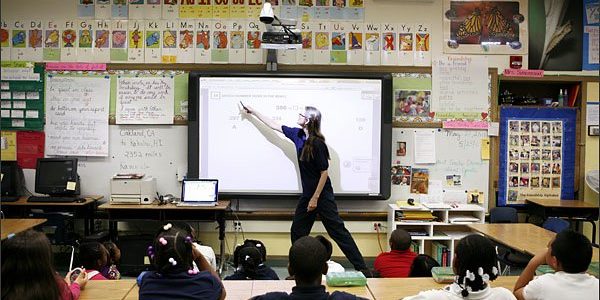 According to 2016 research, the global interactive whiteboards market is said to increase at a compound annual growth rate of 7% through 2020.

Main drivers of this growth are:

When the 21st century arrived…

By the beginning of the 21st century, the technology behind the early interactive whiteboards had considerably evolved and included an eraser, colored markers as well as back-light projection. The traditional whiteboard market also saw a major shift because the educational sector became ever-more interested in interactive whiteboards, trying to surpass the office industry.

In the 1990s, the technological whiteboards would take about 15 minutes of prep time before a presentation began. The features that today’s whiteboards include are those that the 1990s would have only dreamt about.

Interactive displays are now a commonplace in campuses and will soon replace traditional blackboards, whiteboards, flip charts and projectors.

While many schools have already invested in smartboards and projectors, the aim of collaborative learning between students and teachers could not be achieved in some cases. There is a need for a learning solution that is not very passive and engages the students inside the classroom. With the new interactive whiteboard technology, schools will be able to create this change.

By standardizing the kind of technology available in each classroom, faculty movement between classrooms is simplified. Teachers can conveniently connect to and control the LED screen through their preferred device. Furthermore, students can connect to the LED displays through multiple input ports for better interactive learning opportunities. Instead of simply studying through textbooks and traditional whiteboards, students have endless learning possibilities through LED screens and internet connections. Some examples of advanced learning are being able to view national events live or conferencing with experts in a certain field.

According to another research, there is a prediction that the online education market will increase at a 20% per annum compound growth rate throughout the next few years.

Today’s interactive whiteboards have the ability to record displayed content as well as anything written on those boards. This feature makes them a perfect fit for certain situations such as asynchronous online instruction. Notes recorded on the whiteboard can be sent to external devices in real time, thereby providing opportunities for multi-location lectures and remote collaborative learning.

The whiteboards can also be used remarkably in the sports department. For example, the coach can show videos on these interactive LED displays to the sports team and highlight important plays. Moreover, with the technology, the video can be paused, broken down into segments, and zoomed to get a closer look at the opposing team’s moves. In other words, the LED display is giving the school athletics team a competitive advantage over their opponents.

Interactive whiteboard displays on campus are also used for conference sessions and also as an assistance to guest speakers on campus.

All in all, investing in these LED displays is indeed an exciting campaign because of the impact that it has on everyone throughout the campus. Whether it is the principal’s office, the conference room, classrooms, athletics departments, or the distance learning centers of the campus, every single student or staff member has a fingerprint on at least one of the interactive whiteboards on campus.